Building a PyPI Package for a Modern C++ Project

These are my notes on publishing a Python module on PyPI in 2018 using C++17, Boost and Swig.

Note This is indeed my first Python rodeo! The primary target audience is ‘Me in 6 Months’, so YMMV. But hopefully, it may be of use to anyone going down a similar route of using C++17, Boost and Swig to build and package a Python module.

Hext is my little library that has (simple) language bindings for Python, i.e. you are able to use Hext within a Python project.

If a user were to install the Debian-packages, Hext’s dependencies would automatically be installed through Apt.

All the required libraries would automatically be copied into memory by the dynamic linker and be available to the application at runtime. 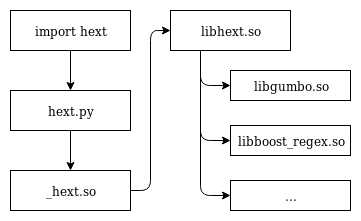 import hext instructs the Python interpreter to load hext.py, which loads the hext python module _hext.so, the "glue" between Python and Hext. This dynamically shared object depends on other libraries, which are satisfied through the dynamic linker.

A YOLO approach to dependency management

Unfortunately, we cannot expect the target system to have Gumbo and Boost installed, nor a standard library for C++17.

That leaves us with only one option: Producing a Python module that includes all (most) dependencies by linking statically. Linking statically brings its own bag of problems, especially since security updates require recompilation and redistribution.
This is also known as the YOLO method, because ‘You Only Link Once’ :)

A Build Environment for Python Modules

To be binary compatible with most systems, it is recommended to use CentOS 5 as a build target (PEP-0513). CentOS 5 was first released in 2007, and is End-Of-Life since March 2017.

Additionally, there’s a GCC 4.8.2, which is quite old, dare I say :) This means we need to either compile our own GCC, or use somebody else’s precompiled GCC for Cent OS 5.

Fortunately, compiling the most recent GCC (8.2.0 in my case) on Cent OS 5 is straight-forward. With the new GCC toolchain in place, building all other dependencies is a non-issue.

CMake provides binary releases for linux-x86_64, but those require Glibc 2.6, which is not available on Cent OS 5 (which is stuck with 2.4).

An alternative is to install a precompiled version of CMake through pip.

We now have everything setup to actually build the Python Module.

Make sure to add the include path of the Python version you want to build against:

Remove all the excess leftovers from static linking to considerably reduce the filesize of your module.

Use ldd to list your module’s dependencies on dynamically shared objects:

In the above example, _mymodule.so only depends on very old versions of libm and libc, and is therefore compatible with most linux-based systems. You can ignore linux-vdso.so (vDSO) and ld-linux-x86-64.so (ld.so).

A list of libraries which you can depend on when building Python modules for the manylinux1 platform tag is outlined here.

You can get more verbose output by invoking the dynamic linker directly and setting some environment variables:

When building your Python Module it is important to tell GCC to statically link libstdc++ and libgcc, i.e. -static-libgcc -static-libstdc++, as to not accidentally introduce a dependency on your toolchain.

If CMake has trouble picking up the static version of libraries, experiment with the following CMake flags: -DCMAKE_FIND_LIBRARY_SUFFIXES=.a and -DBoost_USE_STATIC_LIBS=On.

If you are using Swig and building a module for Python 2 which accepts strings passed from Python to C++, make sure to add the following to your interface file:

An easy way to test your Python interface on whether it accepts Unicode strings:

If there’s a TypeError thrown, like the following, the Python Unicode string is not accepted as an argument for a parameter of type std::string:

Linking libpython is neither neccessary nor recommended.

When the python interpreter encounters the following line:

It will try to find a directory called mymodule that contains a file with the special name __init__.py, which is then executed:

In other words, __init__.py is responsible for loading the shared library and setting up the module.

Swig generates a mymodule.py to be used as a loader for the compiled module _mymodule.so. Unfortunately, you cannot just rename this file to __init__.py and be done with it. I am not sure, but it seems that the generated Python script isn’t supposed to be used as an __init__.py:

The easiest way to load a shared library residing in the same directory of __init__.py, which works with Python ≥ 2.7:

I am using the following bash script to automatically replace Swig’s loader with the above line:

Packaging a precompiled module for PyPI

Precompiled modules and executables are uploaded to PyPI in the form of wheels.

Wheels are basically zip-files that have a certain filename and contain a certain directory layout. See PEP 427 – The Wheel Binary Package Format 1.0 for details.

You can upload as many wheels as you want. The user’s package manager (pip) will choose the appropriate wheel for the user’s environment.

If all the pieces are in the right place, you can now create a wheel:

So this is the wheel: mymodule-0.0.1-cp27-cp27m-linux_x86_64.whl. Notice how it says -linux instead of -manylinux1. This is because setuptools cannot tell which subset of linux-systems this wheel might be compatible with. Fortunately, renaming the wheel is enough, i.e. replace linux with manylinux1:

Now the only task left is to create an account on pypi.org and to finally publish your wheel. The recommended way to upload wheels is via twine:

The complete setup.py for hext

As an example, this is the setup.py I used for packaging hext v0.2.0. Note that Hext also includes a command-line utility called htmlext.

And this is the directory layout:

Hext is a domain-specific language to extract structured data from HTML. It can be thought of as a counterpart to templates, which are typically used by web developers to structure content on the w...

Hext is my little library that has (simple) language bindings for Python, i.e. you are able to use Hext within a Python project. I have previously documented the process of bringing hext to PyPi (...

I have recently written a system daemon that had to handle signals gracefully. That is, initiating a clean shutdown of all threads upon receiving a signal that would otherwise immediately terminate...